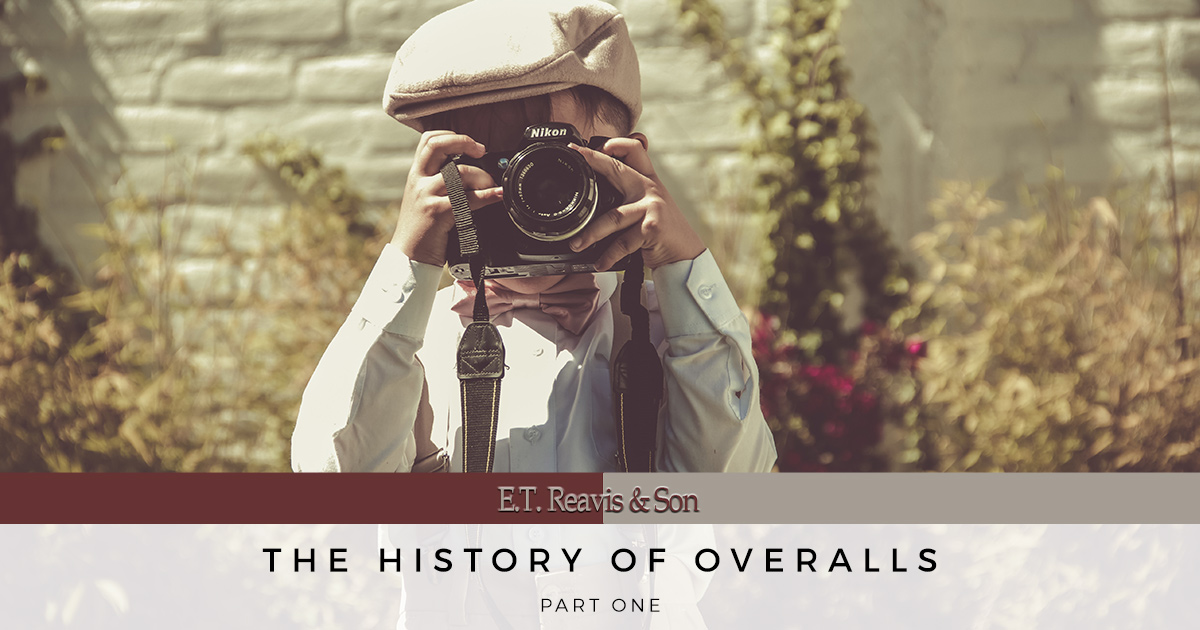 At some point in your life, you have probably worn a pair of overalls. This item of clothing is most popular among workers and children, but every so often overalls will become an essential part of everyone’s wardrobe. Whether you need them for work or you’re just trying to stay up-to-date on the latest fashion trends, overalls are one style that will never fade away.

If you are located near Dresden, and you’re looking for a quality pair of overalls, stop by E.T. Reavis & Son! We are a family-owned company that has been in business since 1890, so we’ve seen it all, and we have it all! Whether you’re looking for women’s Western wear shirts, railroad caps, or a new pair of trusty overalls, E.T. Reavis & Son is your one-stop shop for it all! Stop by our location in Dresden today or visit our store online!

Our history is a large part of who we are, and in order to fully appreciate the versatile nature of overalls, it’s important to learn more about their past. In part one of this multi-part series, we will talk about the history of overalls and hopefully inspire you to stop by E.T. Reavis & Son to pick up some of your own!

Overalls were mentioned in literature as early as 1776, however, it’s difficult to pinpoint the exact moment that overalls were created. Often, they were referred to as a clothing item worn commonly by workers in order to keep dirt off of their clothing.

The first mass-production of overalls came from two men by the names of Levi Strauss and Jacob Davis, who eventually formed the company Levi’s®. This first production of overalls didn’t look exactly like the overalls we know and love today. In fact, at the time, they consisted of denim pants with buttons and a pair of suspenders. This style was very popular among workers because the denim was extremely durable.

The overalls that are most popular today are known as “bib overalls,” and they were designed by a man named Henry David Lee. Henry Lee originally started a business as a grocery distributor, but in 1912, he was unhappy with the workwear he received from suppliers. This gave Lee the idea to open a factory to make his own workwear. It was in this factory that Lee came up with the idea to sew pants to a shirt, and thus the overalls were born. In 1913, this design turned into the popular Union-All and made Lee® a household name.

Much like the design by Levi®, these overalls became extremely popular among workers, especially because it had features like pockets and protected workers’ clothing. However, Lee’s overalls were also popular among women and children.

To promote his overalls, Lee created the Buddy Lee Doll, which was a doll that wore Lee® clothing for advertising purposes. With an increase in sales, Henry Lee made small tweaks to the design of his overalls, such as making the fabric more durable, adding a zipper fly, and a zipper front.

You may know overalls for their role in modern fashion, but as you can see, overalls also played a part in our history. If you are interested in buying a pair of overalls for yourself, check out E.T. Reavis & Son! We are a family-owned company that not only offers workwear overalls for men, women, and children, but we also offer a variety of other items. You’re sure to find something in our store that you’ll like! Stop by our store today or give us a call, and don’t forget to keep an eye out for part two of this multi-part series!